The Wine Summit at the Relais & ChÃ¢teau Post Hotel in Lake Louise has just concluded, and the 13th edition of Canadaâ€™s premier wine and food event lived up to its billing once again, largely thanks to our gracious hosts, the Schwarz Family.

From June 1 to 4, some 120 devoted wine aficionados packed the luxurious yet cozy Rocky Mountain chalet for a three-day celebration of great wine, fabulous food, and newfound friendships. The Post Hotel and its team radiated a sense of warm hospitality and guests were thrilled to have unprecedented access to the winemakers and owners, not just to taste their wines and learn about their regions, but to share breakfast, lunch, and dinner throughout the weekend.

Well-known wine writer, Anthony Gismondi, expertly moderated the tastings and discussions of the wines. Both Old and New World wines shared the spotlight and left lasting impressions on the tasters.

Leading off was Maison Louis Latour, family owned and operated since 1797, with a Corton Masterclass lead by the charming Mark Allen. This â€œonce in a lifetimeâ€ Grand Cru tasting featured Chardonnays and Pinot Noirs grown on the limestone-clay-marl soils of Burgundyâ€™s most famous â€˜Hillâ€™: Corton Charlemagne 2015 and 2014; Corton Clos de la Vigne Au Saint 2015, 2014, 2010, and 2006; and ChÃ¢teau Corton Grancey 2015, 2014, and 2010. The latter wines are unique and exclusive (to Latour) blends of four south-west facing Grand Cru sites, which combines the strengths of several parcels across the appellation. My overall impression: across the board, the wines illustrated inimitable Burgundian winemaking, perfectly balanced precision fruit, and tension with density and power. This doesnâ€™t happen everywhere. I will never again describe non-Burgundian Chardonnays and Pinot as â€œBurgundian-style.â€

Next up was Castello Banfi, the pioneering Tuscan estate founded in 1978 by the Italian-American Mariani family from New Jersey. Legendary winemaker, Ezio Rivella, guided Banfi to become one of the most important producers of Brunello until his retirement in 1999. Co-CEO, Cristina Mariani-May, together with General Manager, Enrico Viglierchio, gave a dynamic account of Banfiâ€™s ground breaking research on the Sangiovese vine. Cristina suggested that Sangiovese mutates readily into its environment, and “is not a variety, but a family of varieties and dialects.â€ With more than 45 registered Sangiovese clones, Banfi today works with 15 unique clones (registered for all to share). The nine wines presented wowed the audience: Brunello di Montalcino 2004, 2007, and the classic 2010; Brunello di Montalcino â€œPoggio alle Muraâ€ 1998, 2001, and 2004; and Brunello di Montalcino Riserva â€œPoggio all Oroâ€ (Montalcinoâ€™s Hill of Gold) 2004, 2006, and 2007. Overall impression: careful selection and painful attention to detail result in an astounding range of age-worthy Brunello wines.

Simone Horgan-Furlong is the charmingly elegant dynamo and co-CEO at Leeuwin Estate. The wineryâ€™s Chardonnays are widely considered to be Australiaâ€™s finest, and the Cabernets among Western Australiaâ€™s most sought-after reds. Some of the lowest yields in Australia and a near-perfect microclimate lie at the root of this estateâ€™s success. According to Simone, â€œhere on the western edge of the continent, where the temperate Indian Ocean meets the cold Southern Ocean, magic happens.â€ A vertical tasting of her familyâ€™s Art Series Chardonnay was the highlight of her animated presentation.

When one thinks about Austrian wines and its famous GrÃ¼ner Veltliner and Riesling producers, none are more iconic than Weingut BrÃ¼ndlmayer, one of the worldâ€™s top white wine producers. The estateâ€™s engaging Thomas Klinger explained Austriaâ€™s classification system of 2010 with a range of shockingly good â€˜Erste Lageâ€™ or â€˜First Growthâ€™ wines, all Reserve wines from the estateâ€™s most pedigreed vineyard sites in the Kamptal appellation (DAC). First up a mini-vertical of Langenloiser KÃ¤ferberg GrÃ¼ner Veltliner (2015, 2014, 2013, and 2011), then turning to their top Riesling â€˜Erste Lageâ€™, ZÃ¶binger Heiligenstein, the BrÃ¼ndlmayer â€˜Grand Cruâ€™ (2015, 2014, 2008, 2003, and 2001). Overall impression: finesse-driven, powerful, dry wines that are subtle and restrained in their youth, but can attain an almost biblical age. 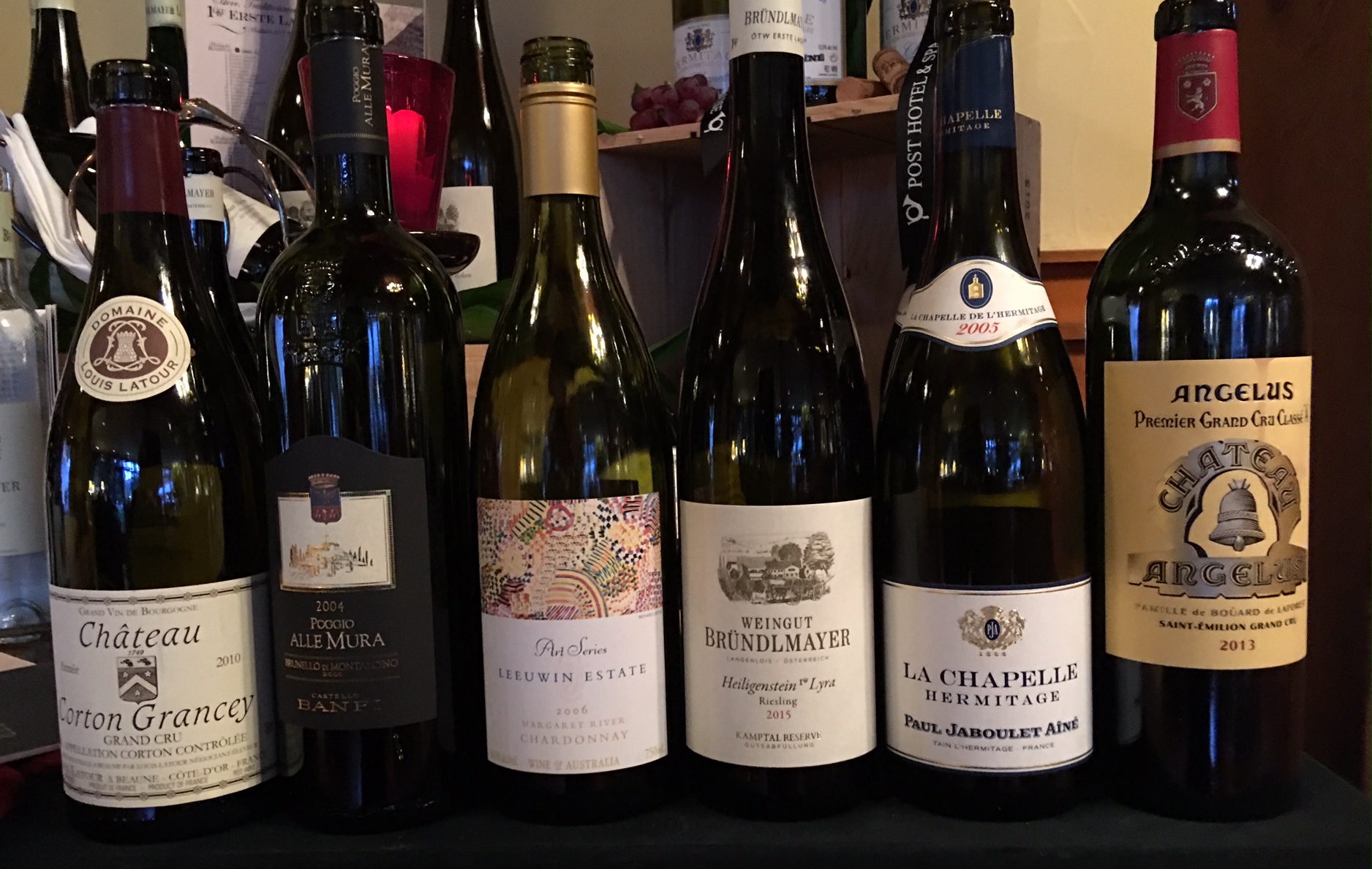 Exciting things are happening at Paul Jaboulet AÃ®nÃ© where the new owners, the Frey family of Bordeauxâ€™s ChÃ¢teau La Lagune, are restoring this historic house to its former iconic status. Under the watchful eyes of oenologist Caroline Frey, innovation rules: organic conversion, biodiversity, low yields, concrete eggs, etc. Export Director Arnaud TrouvÃ©â€™s presentation was â€˜All About the Northâ€™ – the northern RhÃ´ne that is. Two powerful Marsanne-Roussane Hermitage blends led the way to a La Chapelle masterclass. At only 60 hectares, the south-facing Hermitage appellation on the east bank of the RhÃ´ne is tiny but with an enormous reputation. Jabouletâ€™s â€˜La Chapelleâ€™ bottlings are among the most collectible. Made exclusively from vines aged 60-100 years old, and with ridiculously low yields, the wine is typically blended from a mosaic of different parcels and soils, and is considered at its peak after 20 years. Arnaud treated us to a memorable vertical tasting of vintages 2013, 2005, 2003, 1998, and 1985. Overall impression: slow to mature, more savoury than sweet.

ChÃ¢teau AngÃ©lus â€“ for the past eight generations, ChÃ¢teau AngÃ©lus has been the work and passion of the de BoÃ¼ard de Laforest family. Co-proprietor Jean-Bernard GraniÃ© delivered a compelling study of the Saint-Ã‰milion appellation, highlighted by a vertical tasting comprising the 2014, 2013, 2012, 2011 and 2006 vintages. In addition, Jean-Bernard shed light on some of the viticultural changes that have allowed Bordeaux vintners to make more consistently good wines in every year, virtually eliminating â€œbad wineâ€ altogether, namely: more severe selection (pre-1970s â€œeverything was picked and often chaptalizedâ€), green harvesting, shoot thinning, and lower yields. Therefore, the noticeable shift in Bordeaux style and quality may not be entirely due to Robert Parker and Michel Rolland after all!?

In addition to the seven seminar tastings, the weekend packed in several wine-paired meals featuring many other exciting and top-level wines. Lunches and dinners were expertly prepared by the Post Hotelâ€™s executive chef, Hans Sauter, and his culinary brigade.Â  Of special note, the concluding Gala Dinner featuring these seven flagship wines:

Even though some of the tastings took place right after breakfast, all of us were keen to partake, which reminded me of a favourite response when asked about the best time to drink wine: â€œYou have the difficult choice between breakfast and dinner.â€ For this audience, with this caliber of wines, the answer was clearly anytime.

Final tally: 3 breakfasts, 2 lunches, 3 dinners, more than 120 wines poured from 900+ bottles into more than 12,000 hand-polished glasses, and $115,000 raised for Kids Cancer Care Foundation of Alberta.Â  Net proceeds from the Wine Summit have raised more than $935,000 since the inception of this annual extravaganza of wine appreciation and education. Those donations would not be possible without the generosity of the many vintners who have shared their wines and their time over the years.

All the lucky attendees salute George and AndrÃ© Schwarz, not only for their exceptional hospitality, but their spirit of generosity!